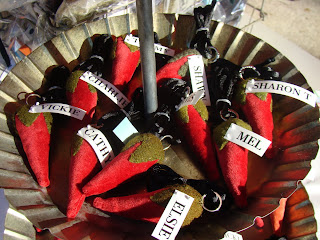 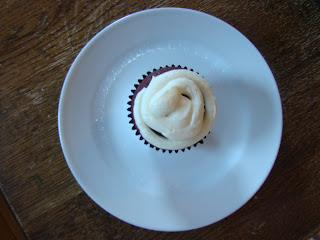 Yes, the County Fair is next week so it is only appropriate that we decide what to take for foods projects. Drew decided to try his hand at cupcakes. Red Velvet cupcakes with cream cheese frosting. Batch #1.....very red, good, but now knows the difference between granulated vs. powdered sugar. He decided frosting isn't nearly as good with granulated sugar!! Lesson learned. Batch #2 Grandpa thought they were darn good.......he ate, well..............I won't say!! Last night, Batch #3, only 6 left. The cupcakes must have been good?! Drew experimented with the frosting and the decorating tip......he has a little ways to go yet with his signature swirl!!

I love when the kids bake but the mess. I sat down at my computer to blog this morning only to find cream cheese frosting on the keys!!! Who do you suppose that was? Drew is a good baker but makes LOTS of messes. When I get hungry I can just lick the walls and cupboards as there is cream cheese frosting everywhere!!
Posted by Ewe and Eye at 5:07 AM 1 comment:

Well, I just finished hooking the horse. I ran out of wool and had to dye more, then brought the horse to work but forgot to bring the wool that I had cut at home. Some days!! I remembered the wool this morning and now it is ready to be steamed and whipped. My "plan" is to steam tonight and then whip tomorrow while dying wool. Lately my "plans" haven't gone "as planned".
I am glad to have it done............ it's such a good feeling to have a project completed, almost. I need a name for this fine creature. If you have any suggestions please let me know. The mat on linen retails for $50.00. 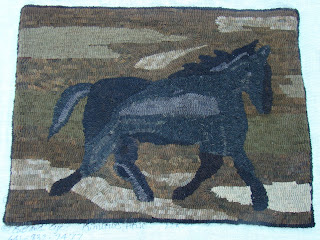 What a pear! This pattern is from the book Nature's Offerings by Maggie B. This is one of many projects from the book. Mom made this one using silk matka. We washed the fabric to give it a worn look. The pear is great in person.......it looks so old. The book retails for $24.95 and the matka is $22.00 per yard. If you haven't worked with this fabric it is nubby but has a great "hand" to it. 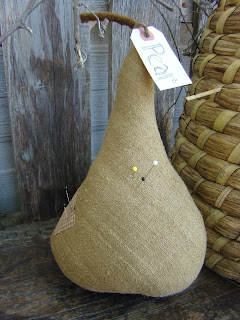 We have had LOTS of excitement at our house the past few days!! Dave and Drew are on a canoe trip with the church in upper Wisconsin and Natalie is on a mission trip in Indiana with the church. Yes, our household has been cut in half and what a difference it has made!! The house has stayed somewhat cleaner, less food to prepare but OTHER things to deal with.
The kids have laying hens for their 4-H projects. I purchased 36 chickens of various breeds......I thought that I was out of my own mind!!! As of today we are down to 14! We have had a large problem with a coon family.
I was standing at the sink, during the middle of the day and I could see the chickens flying around the pen. I flew out the door and started screaming.....the mother coon was on her way over the fence with one of our chickens. It was the largest coon I have ever seen. The chicken barely survived and the coon got away (yes, husband was gone).
Dave set a trap for her but she destroyed the cage twice!! Feisty thing.
My dad so graciously drove me to get horse paneling to place on top of the outdoor pen..........at last the pen was secure!! Dad did say the coon will even crawl on the roof to get to the chickens....a wise old man!!
Two days ago I took a bucket of kitchen scraps out to the chickens and couldn't believe my eyes. 4 dead chickens and one nearly dead!! They all had their heads bitten off. I was just sick. I couldn't figure out how the animal got in and what kind it was. After a little research I discovered that coons/weasels bite the head off and eat the brains for nutrients...........YUK!!!
That night I locked the chickens inside the shed where I knew they would be safe! I stepped out of the house at 10:00 that night and heard some fluttering in the shed. I put my boots on and took the kids with me (safety in numbers when it's pitch dark), we searched outside and inside and found only empty egg shells. We closed the door and headed to the house when Jenny discovered a coon on the roof of the shed!! The coon had peeled back the tin roof to get inside the shed! How clever..........but not for long! We chased him back and forth on the roof with a bebe gun and flashlight...........not really clever on our part!! I was trying to figure out what my plan would be!? Hee Hee.
Well, what does one do when the only weapon you own is a pitch fork? I have used it to kill possums in the chicken pen. Sam ran for the fork and Jenny graciously trapped it in the corner of the shed.......now what do we do? Weapon #2, a garden rake! It didn't really work like I thought it would. It was 10:30 at night and who should I call that can kill a coon for me? I called my brother Jeff and he came over and shot our critter. 5 shots later he was dead............I now know how to load and unload a 22. Anne's has her gun!!!
Still not sure we will have chickens for the fair this year...poor things are pretty shook up. Who would want to lay an egg?! You know this stuff ALWAYS happens when the husband is gone :)
I also had a REALLY bad smell in my garage...........like something died!! On Monday, while driving I had hit a Morning Dove. I didn't realize it was hanging upside down on the front of my bumper.........hence the REALLY bad smell!! Thanks to my dad for removing the dead bird and burying the dead coon!
Yesterday Jenny had her 4 wisdom teeth removed. She found out that her stomach doesn't do well with narcotics!! Her youngest brother made chipmunk noises at her.......wait until it's HIS turn. Jenny slept through the night so I am taking that as a good sign. I hope today that her swelling will go down some.

The troops all return home sometime today. Things, I hope, should return to normal...........whatever that is!? 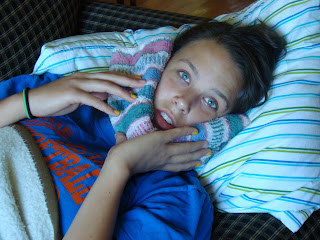 A new addition to the garden.......see if you can find it. Dad's garden seems to be all in place. Yesterday, July 5th, a temporary resident of the garden was put into place. 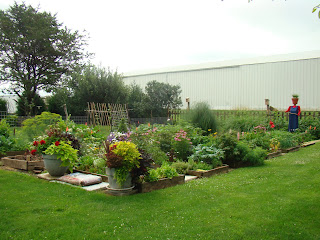 Meet Ms. Fertile. This is Dad's new creation/addition to the garden. I wanted to get closer but the mosquitoes were eating me alive. Dad is going to spray for the pesky critters this week. When you come for the BYOP you will have to check her out. I am praying this wasn't one of mom's dresses!! 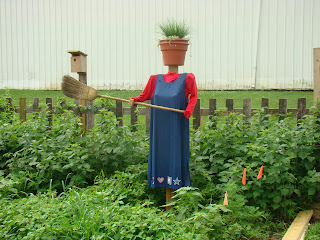 The 4th of July brings lots of activities in our community. The day begins at 8:00 a.m. with the 5k City of Maples Road Race. Pictured below are 3 of my children that ran in the race. 2 were in the top 4 of their age brackets. I also ran the race but am not pictured......thank goodness. I also did NOT place in the top 4......just crossed the finish line!! :) 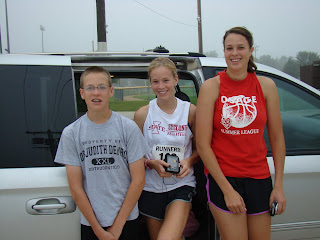 The parade begins at 10:00 and I was asked to drive the convertible for Miss Osage 2009 who just happens to be my oldest daughter. I had her take a picture as it will probably be the closest I get to a convertible!! 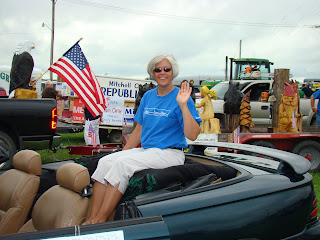 This is my daughter Jennifer who was Miss Osage 2009. We were so thankful it didn't rain as neither one of us knew how to put the top up!! We could have had some serious trouble! 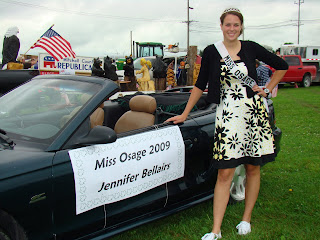 The day ends with supper and the annual family whiffle ball game followed by root beer floats and sometimes fireworks. We split up into 2 teams........guys against girls. It is our 11th year of playing and every year the girls seem to win! ;) It is always good for a few/many laughs......the kids are getting bigger and the adults are getting OLDER. Grandma's tactic this year was to get hit by the ball so she could walk to first base.....her grandsons wouldn't allow it!! 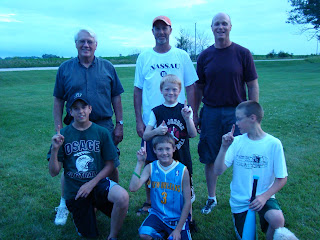 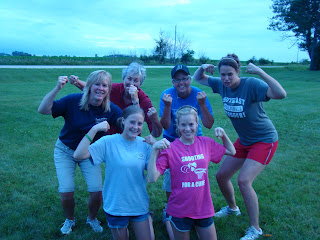 I hope you had a wonderful 4th of July. We enjoyed the rain, family activities and of course all the great food.

The "Queen" is in the Shop

"Queen Victoria" has arrived.....she made her debut on Wednesday. You can find her overseeing her kingdom of wool in our shop. Victoria is 25 inches tall. Queen Victoria wears her crown of jewels proudly. The pattern is available for $8.00 at the shop. 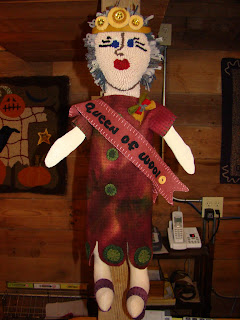 "Queen" Victoria does get out of the shop but does not travel far from her Kingdom. 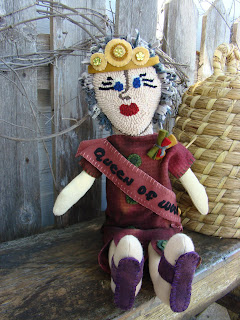