Rug hooked, steamed and whipped?
Well, the rug was hooked and steamed but not wrapped.
If only this rug could talk.  It has been riding in my van in the hopes of whipping here and there.

It has been a long time since I have wrapped a rug and I must say I was a little rusty.  CORNERS.  I HATE corners.  There are 4 corners on this rug and ALL four look different.
I REALLY need help with these.

Suggestions?  I am open for anything. 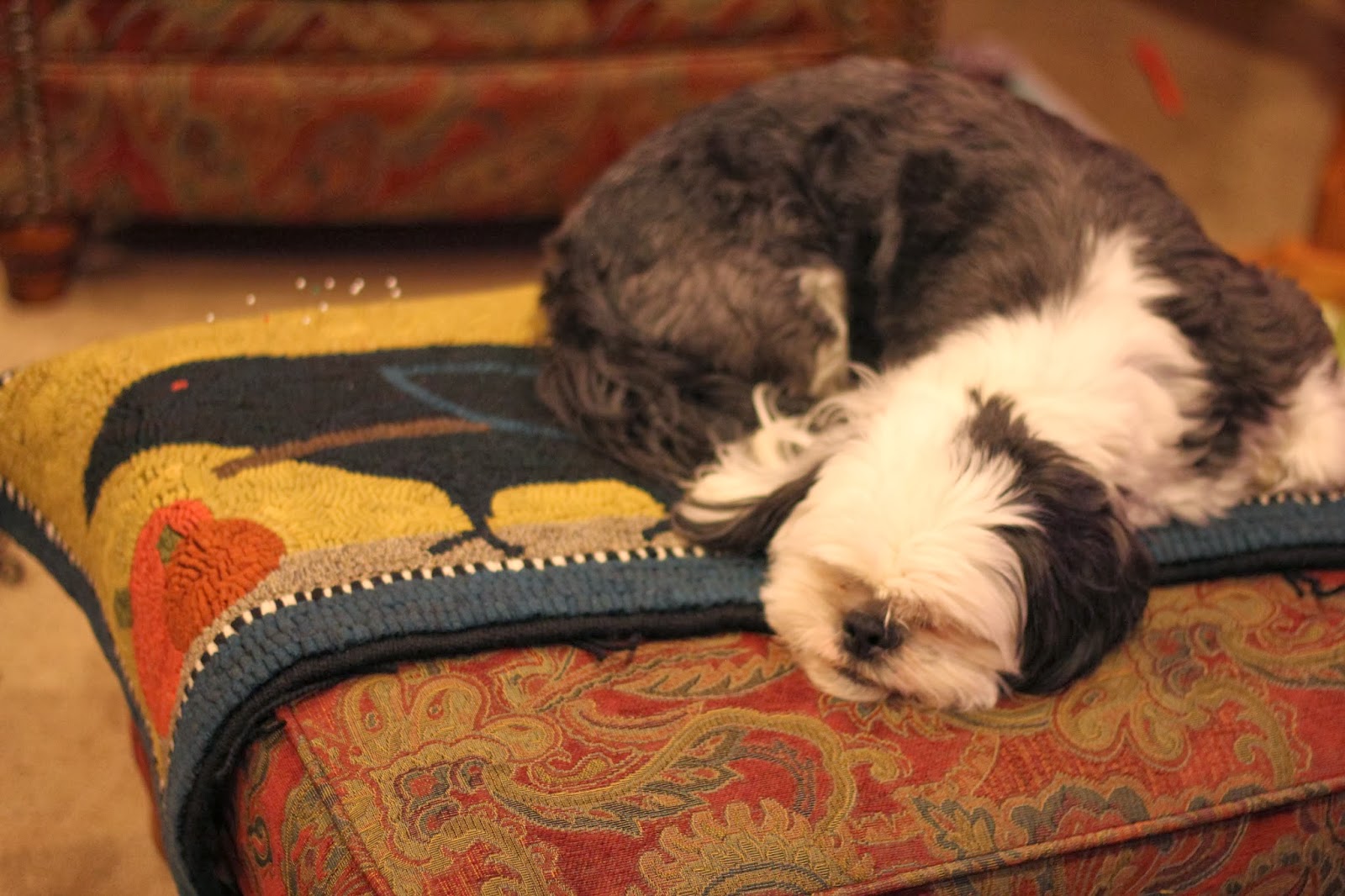 I found the best place to wrap this rug was on the footstool.  I sit on the floor and it makes it easier to wrap.  No stretching on the rug while I make my way around.

Complications?
Yes.
Natalie's dog LOVES this spot.
As you can see he didn't budge.  It didn't even bother him that I was invading HIS space. 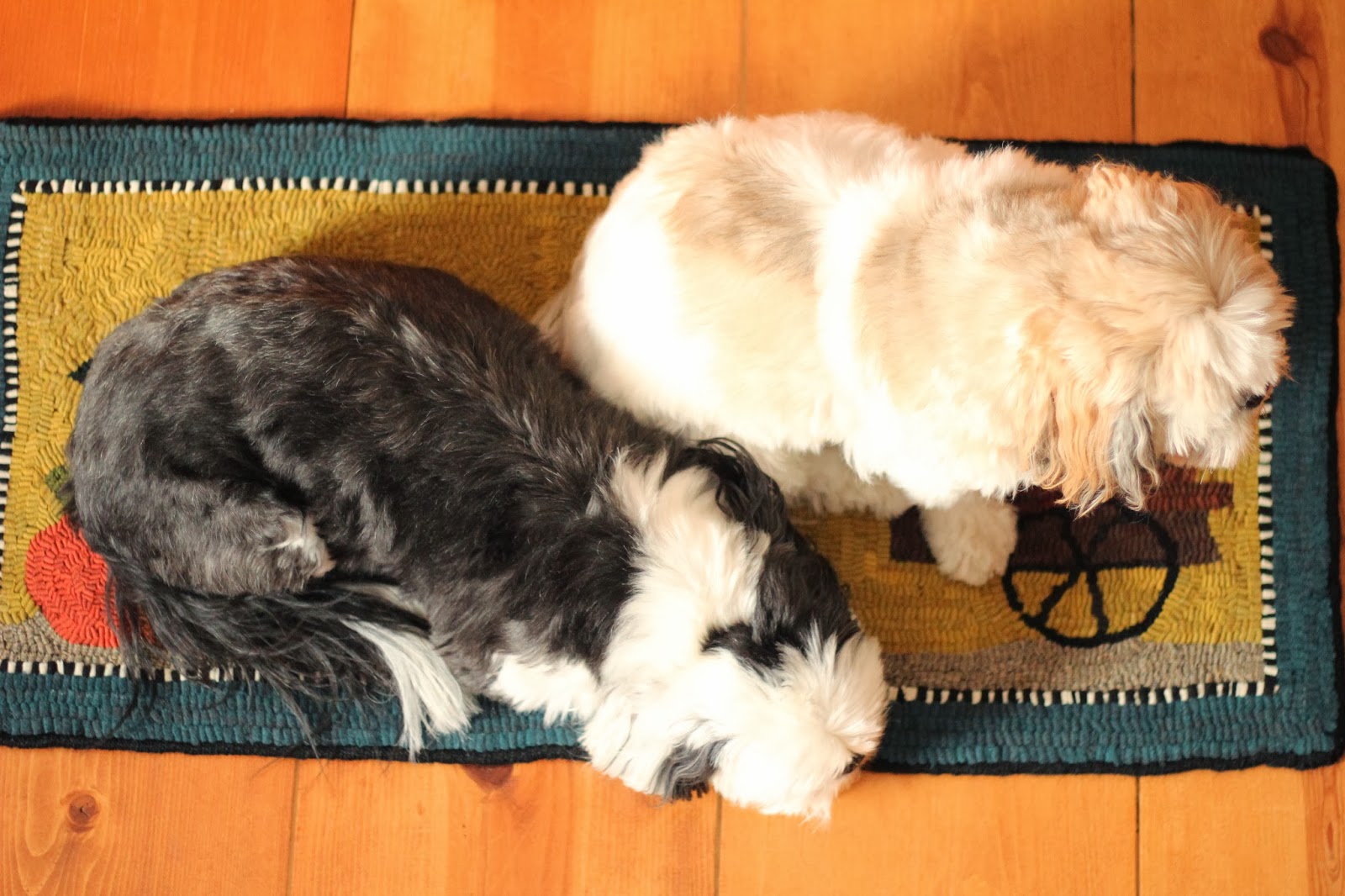 I tried to take pictures of the rug for the web site and as soon as I climbed to the top of the ladder I had company!  They would NOT budge.  I had to crawl down the ladder in order to get them off of the rug!  Guess I got my exercise?! 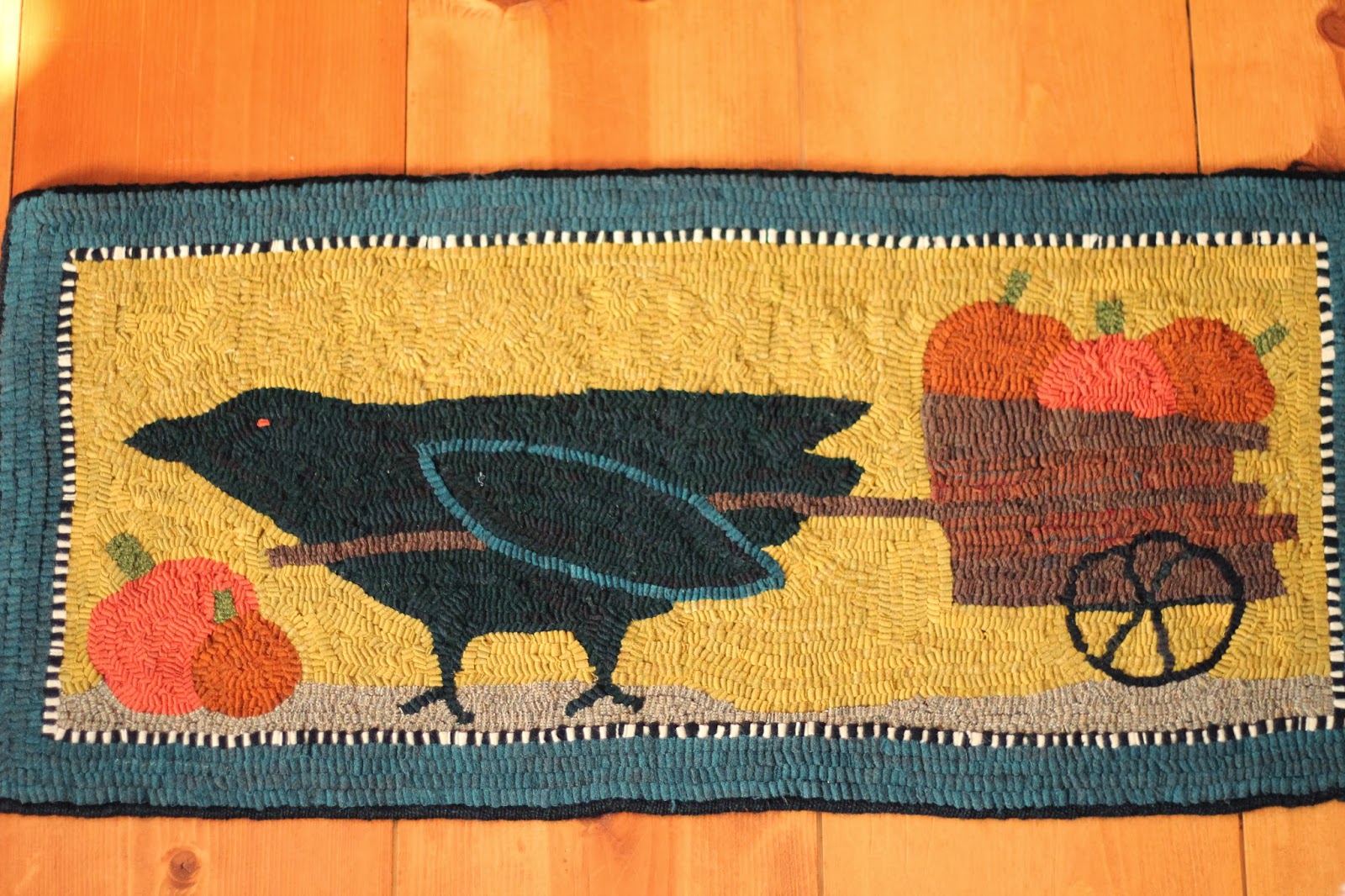 One of our reproduction rugs.
3 Birds Rug hooked by Turby M. 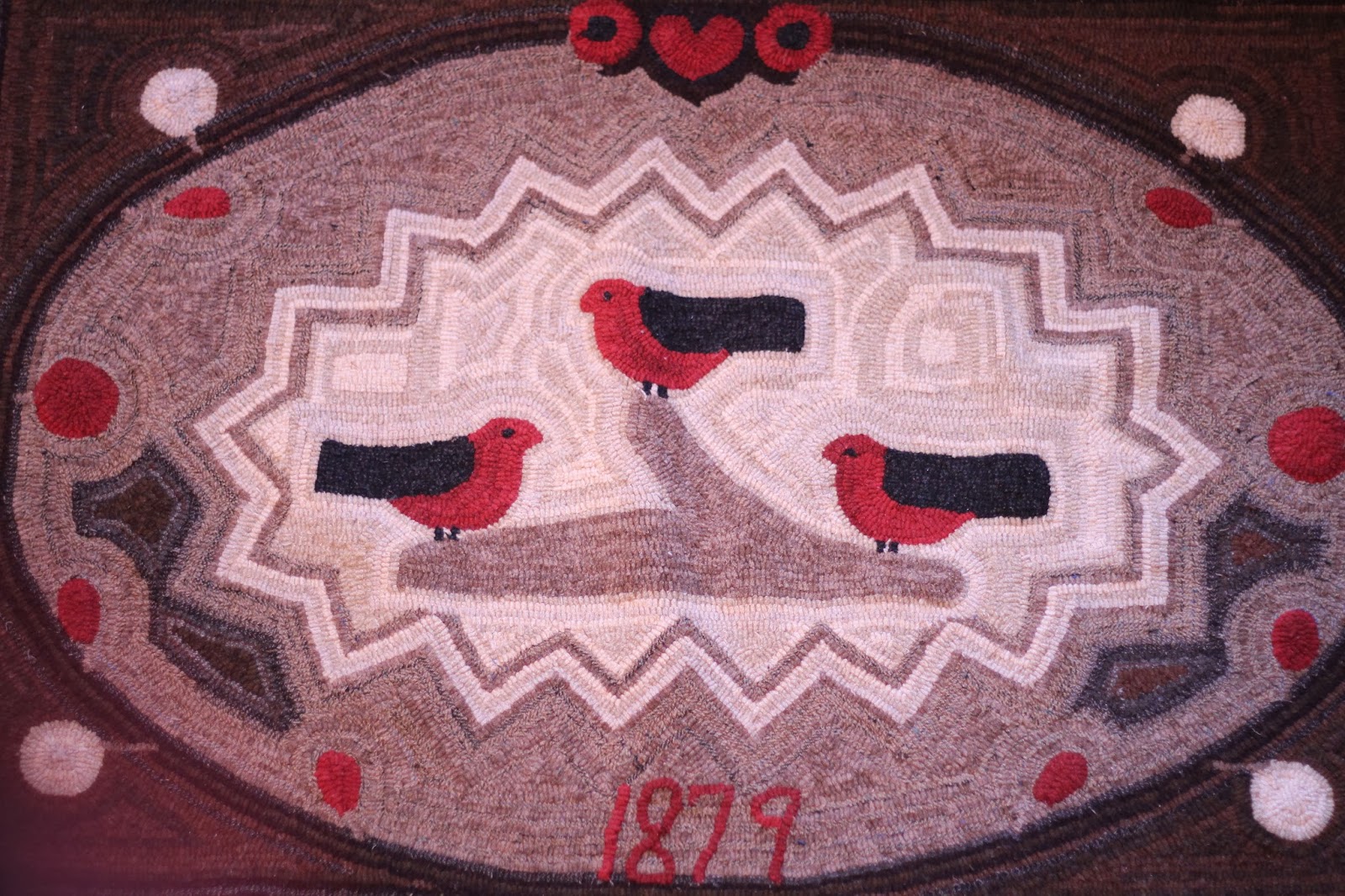 My lens couldn't get the whole rug in laying on the floor.
The top picture shows the true colors of the rug. 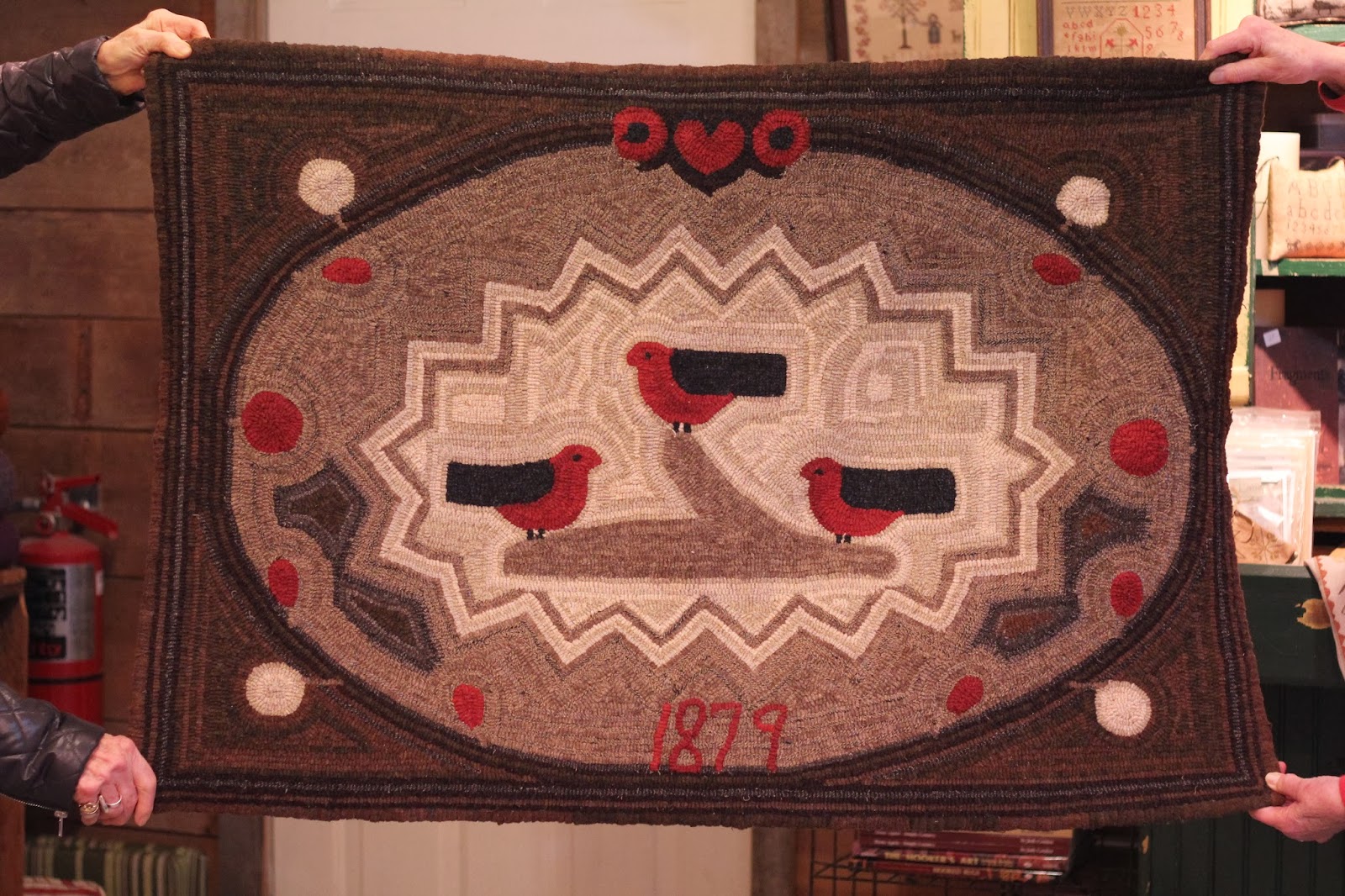 I believe that Turby hooked this rug in about 3 weeks.  She puts all of us to shame the way she completes rugs!

Turby added a few things to the rug.
She is very creative but also VERY humble!

The rug was simply AMAZING!

I heard through the grapevine that someone else has finished this rug.
Show and Tell please Avis.  :)

This rug is on my list of to-do's but I have to complete a couple other projects first.

February 12, 2013.  A day I am sure we will all remember for sometime.
The evening of February 12 a truck driver had just received his load and was headed for delivery.  What he didn't expect was to get pulled over in our small town for driving 45 in a 25 speed zone.  In the process of pulling over on the shoulder he went a little too far and the semi flipped into the ditch. 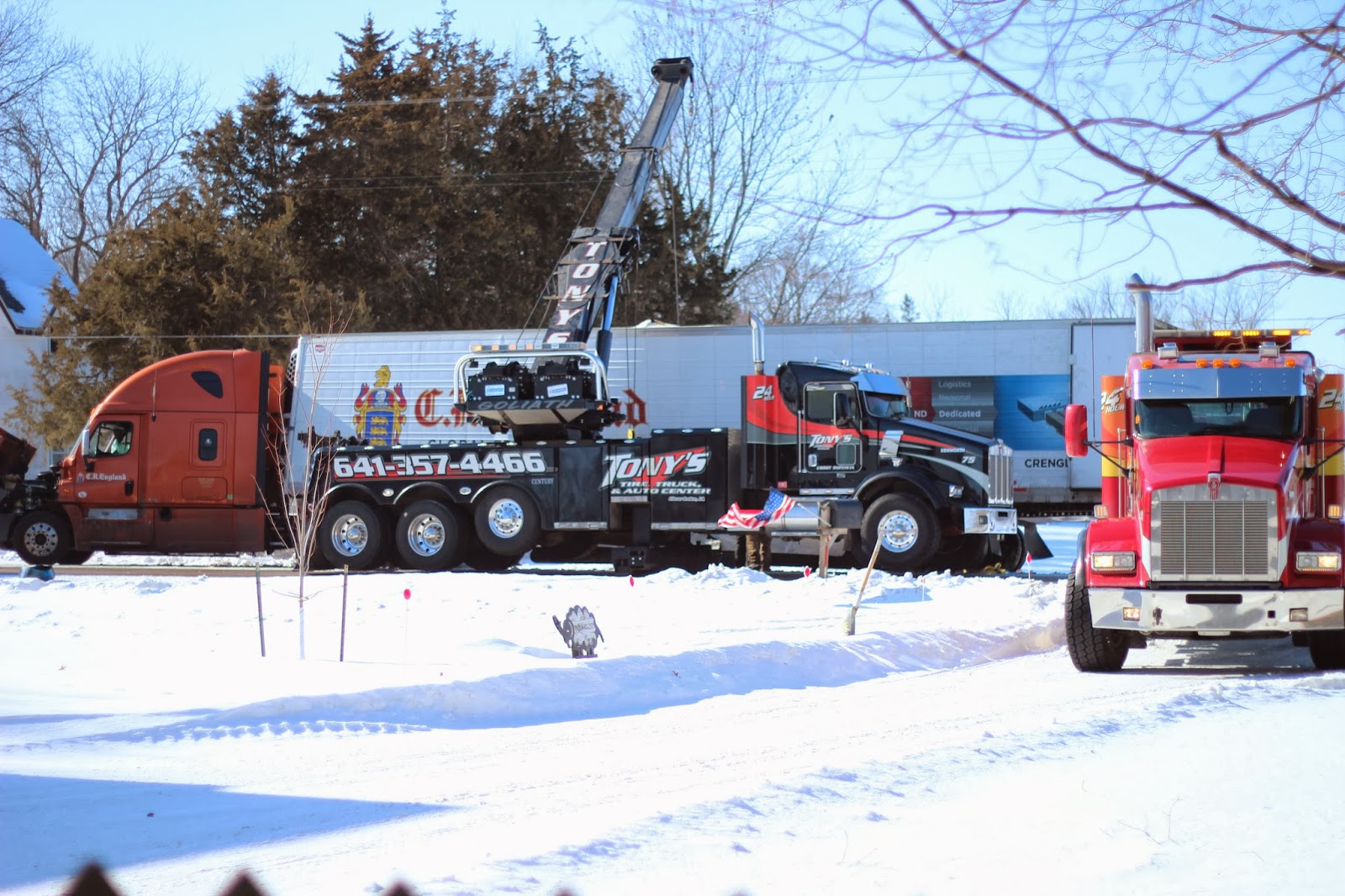 This all took place at 11:00 at night.  Our shop played host to the truck driver and the owner of the trucking company till arrangements were made.
In the mean time the road was officially closed until further notice. 2 HUGE tow trucks (at the cost of $1,000/hour), an inflatable to boost the trailer up, a skid loader and a dumper trailer were used to clean up the mess.

The truck had come from the Hormel packing plant and was full of pork.
Now, when I heard that it was pork I was imagining neatly wrapped packages of pork head for the grocery store.
Well, not so much.  It was pork but what they call pork bellies, NOT individually wrapped but in large cardboard containers.

See the young man standing in the trailer bed on a big pile?  He had the lucky job of taking the cardboard and leftover plastic out of the trailer.
Yep, he is standing on a pile of pork bellies.
Imagine he didn't have that on his schedule!

It was 18 hours from the time the truck driver got pulled over to when the mess was finally cleaned up.
If by chance you came to see us yesterday we apologize.  Things were slightly out of our control.

I gave a lot of thought to becoming a vegetarian yesterday!  Sometimes you are better off just not knowing!! :) 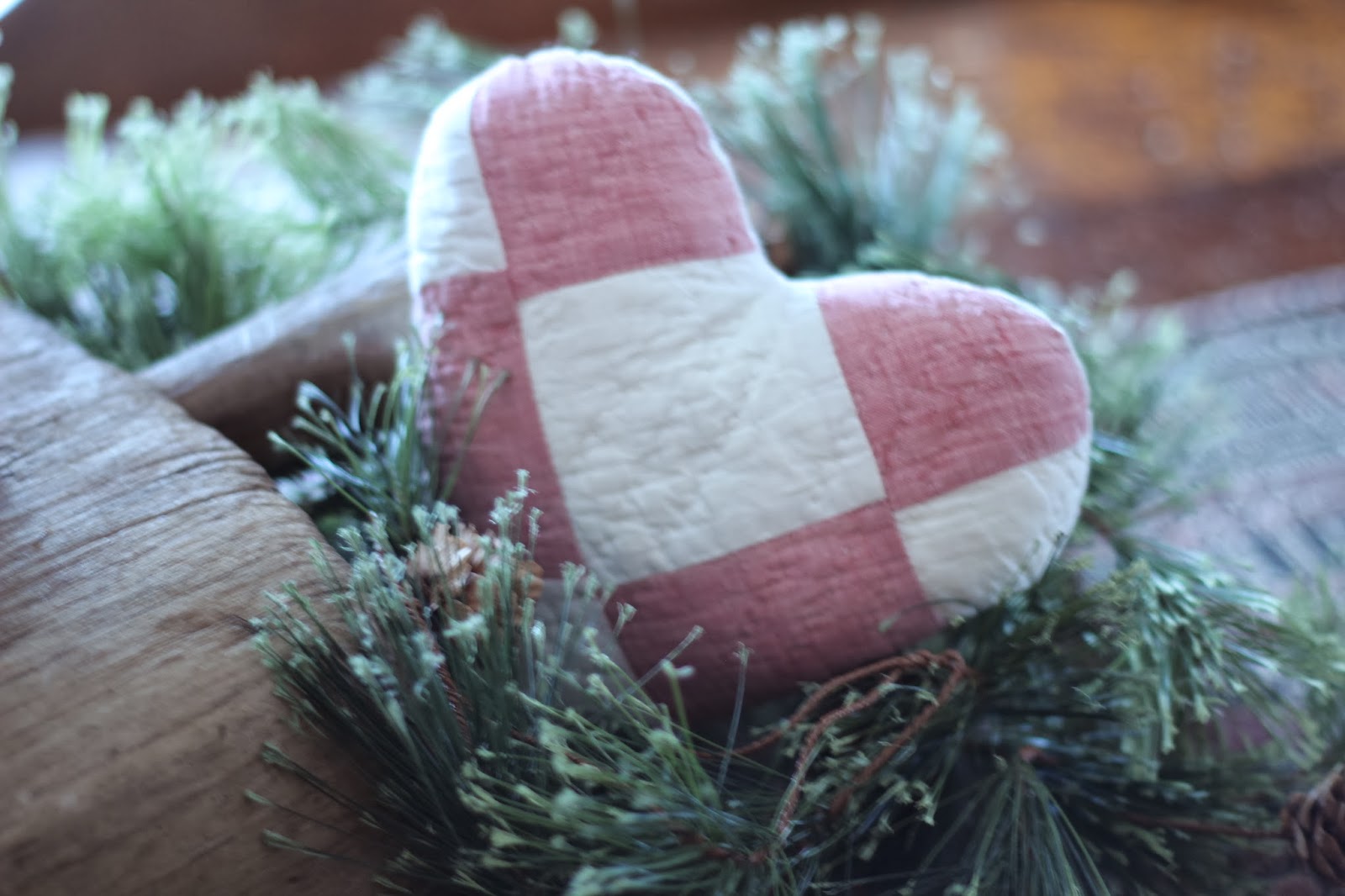 Happy Valentine's Day!
May your day be filled with warmth, joy and love.

A piece of Mom's decorating on the long harvest table.
It gives you that warm, cozy feeling of times gone past. 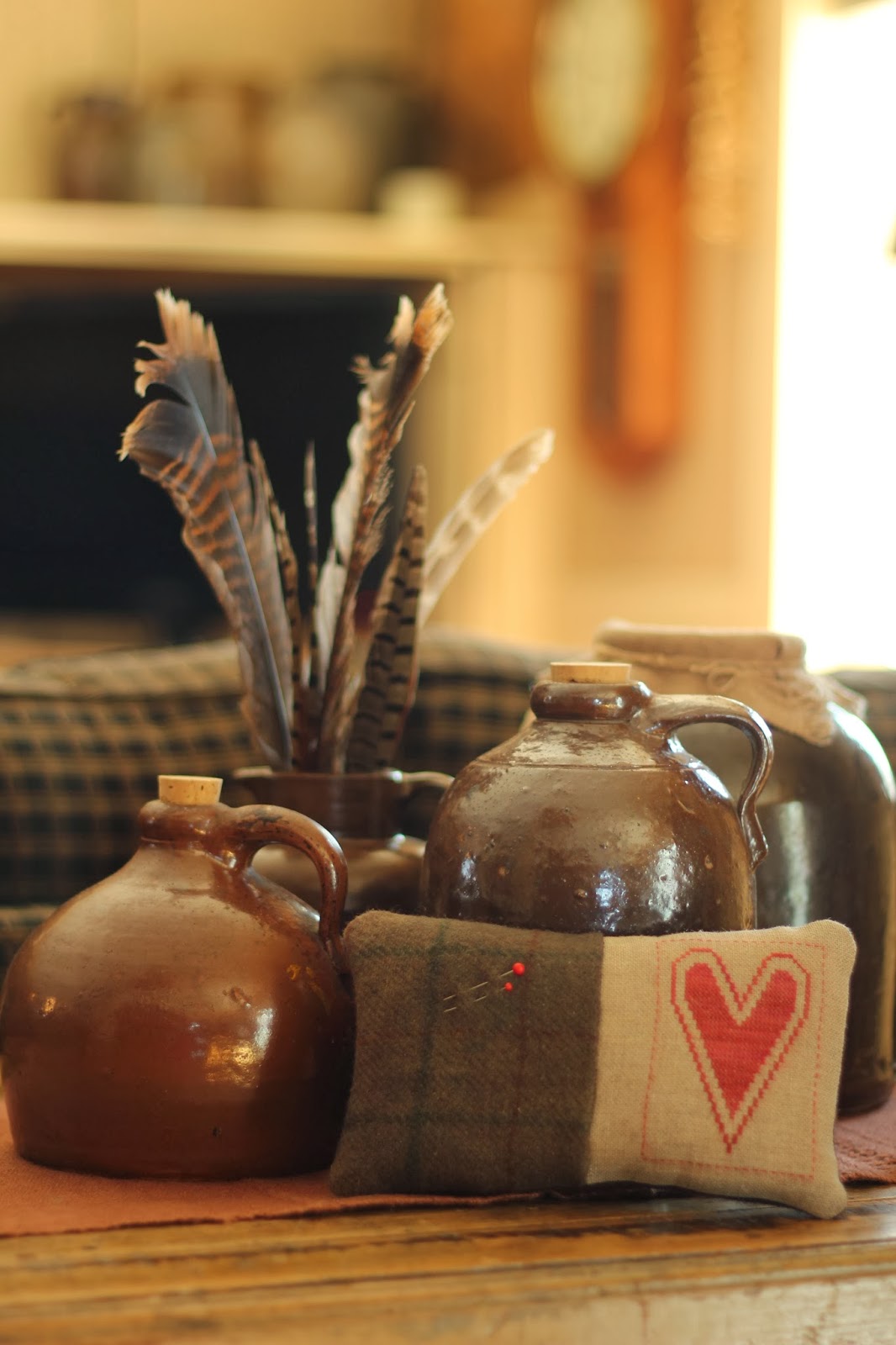 Mom and I were wonderfully surprised this morning with a gift from our stitcher Barb. 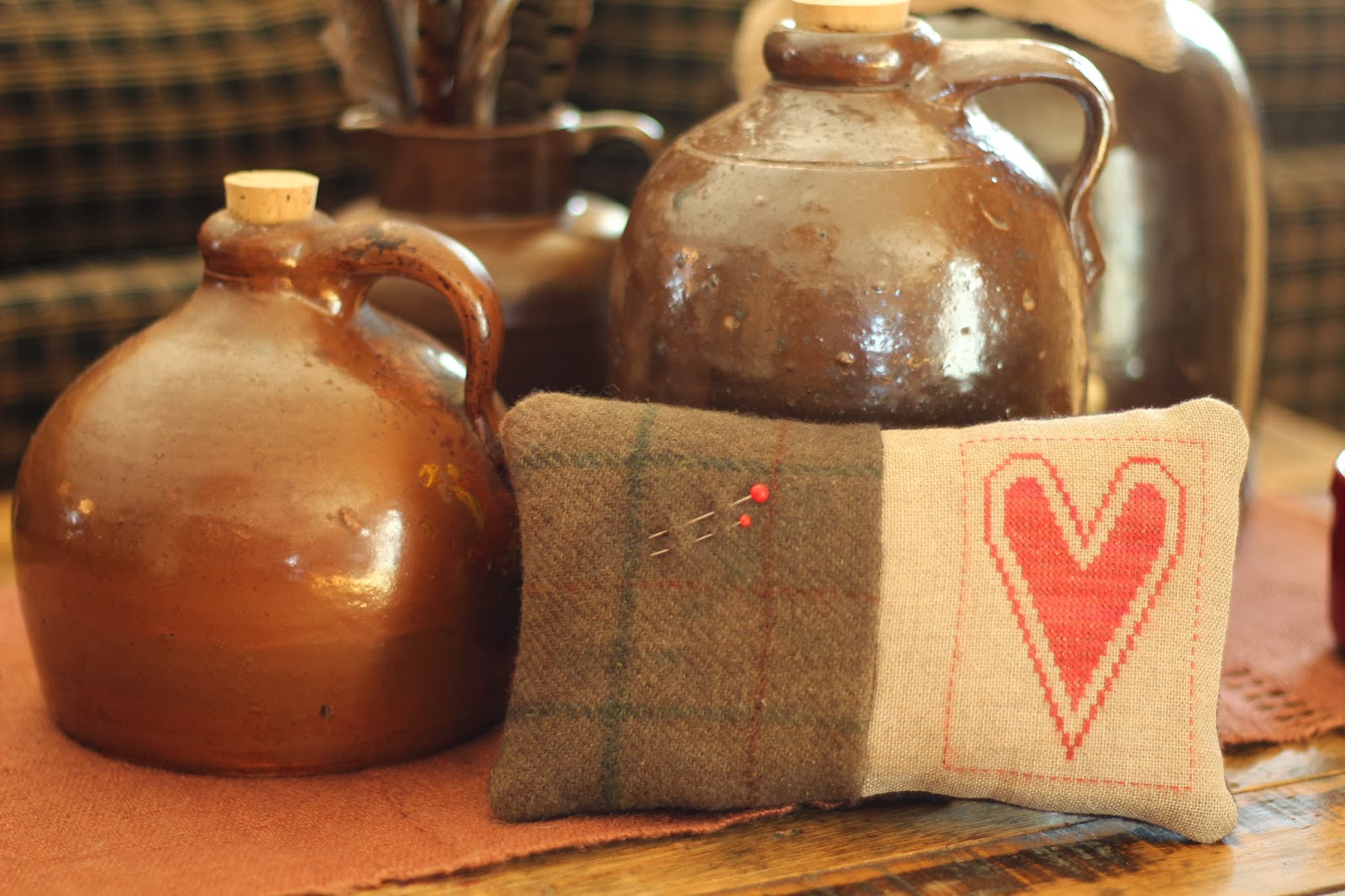 Barb gifted each of us with the wonderful handmade pincushion.
A perfect Valentine!
Barb not only designed the pattern but she stitched it and stuffed it with sawdust.

Barb, I don't know about mom but you made my day!!

Thank you for all you do for us.  We certainly couldn't do it without you.  We love you!

Happy Valentine's Day.
May your day be as special as ours was!

Is It July Yet? 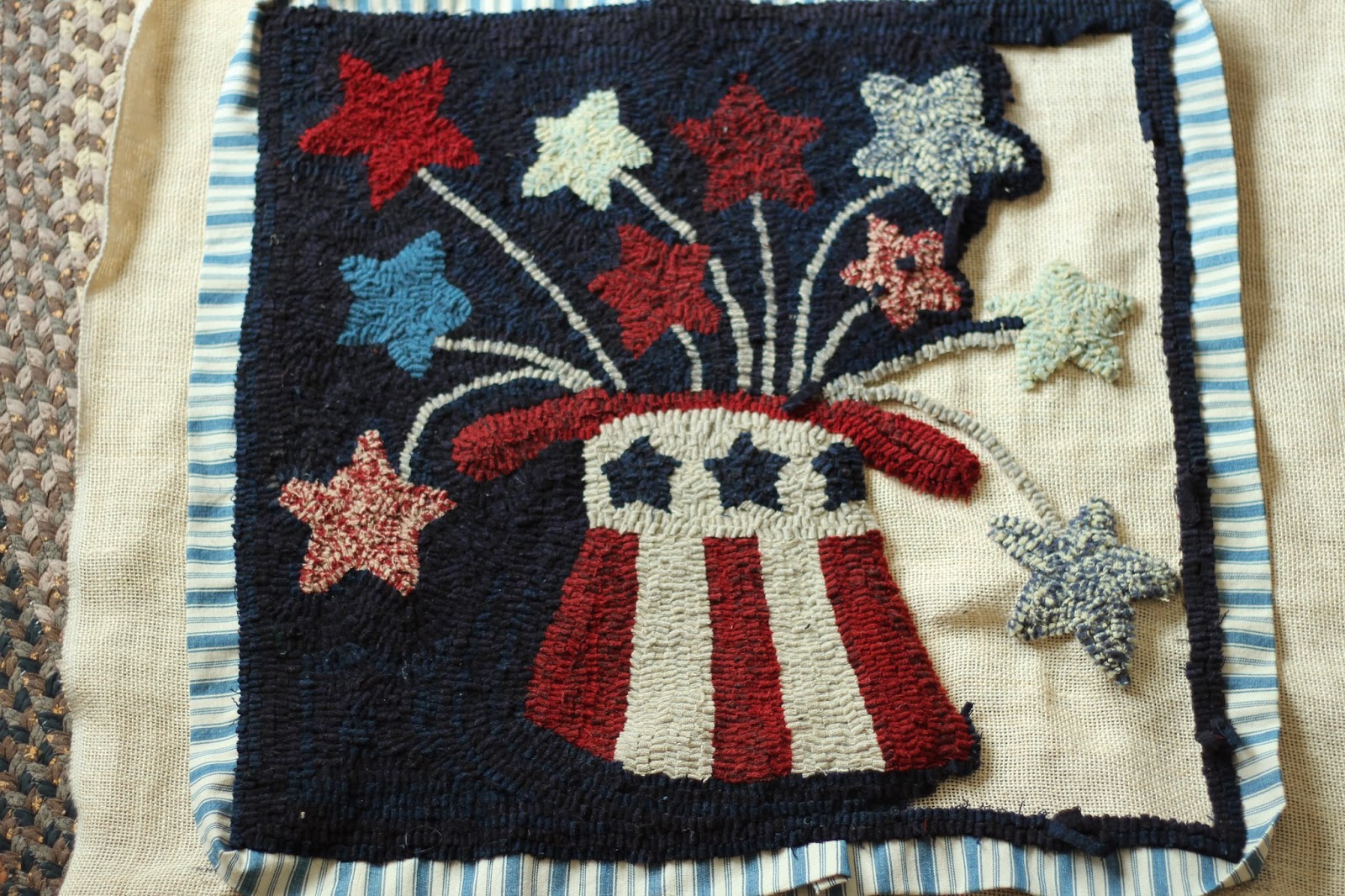 The weather has played a BIG factor in our parts of the woods.  Thank goodness we are only on the edge of this next storm.  whew.

Mom found a little motivation somewhere and began this project that was tucked away in the cupboard.
She ordered this kit from Polly Minnick several months, years weeks ago.  ;)
Think she was a little tired of the BIG rug she was working on and wanted to see some "real" progress. 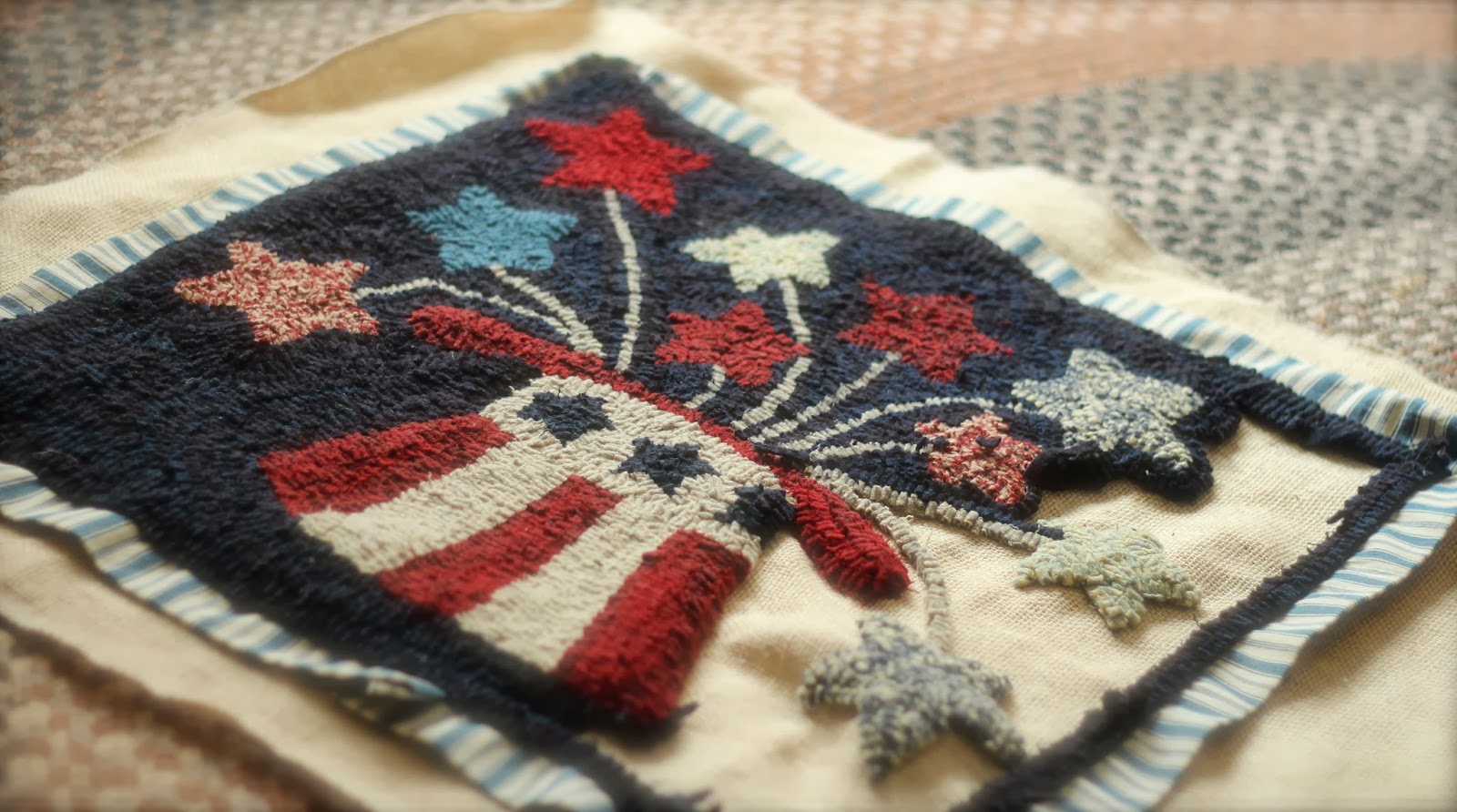 I think it's looking pretty good and when summer rolls around she will be glad it's completed.