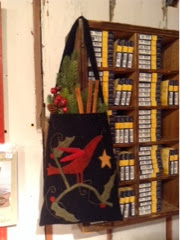 Mom finished these up before the holiday.  Thought they looked pretty good. Pattern is called "Bird n Holly Chtistmas Bag" and retails for 8.00. Could easily be changed for use all Winter. 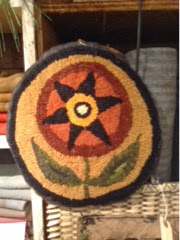 Small chair pad or table mat hooked by Marge. Drawn on linen and retails for $20.00. Quick project with lots of options.
Posted by Ewe and Eye at 6:52 AM 2 comments:

"I" is the letter

Last year at Christmas I didn't post any photos of our family Christmas and I heard about it. So this year I made sure that I took my camera so you could see a few of the "I" gifts and to see how Mom and Dad had the table set. 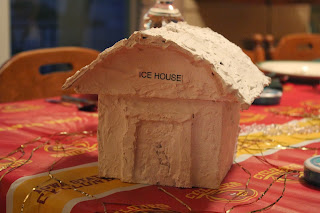 Ice house and Igloo were custom made by Dad. 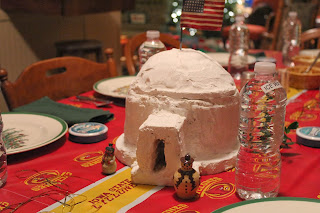 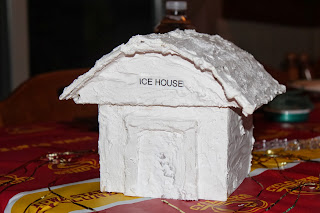 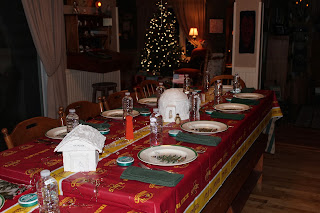 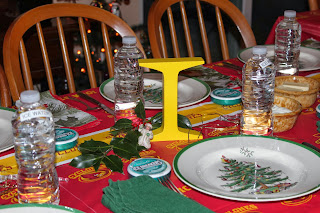 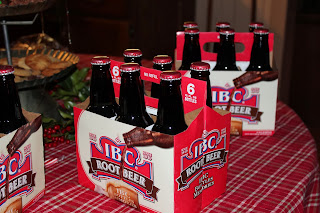 IBC root beer was the beverage choice of the "younger" crowd. 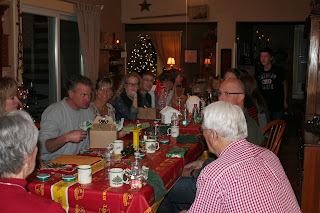 The story of Curious George and the Igloo was read as the "I" gifts were passed around. 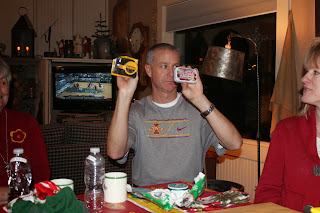 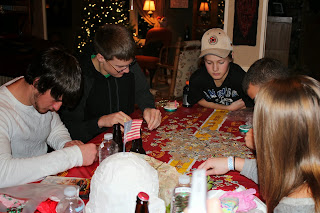 A cheap puzzle that began with an "I" that was the hit of the evening.

Dad and Mom managed to wear "normal" apparel this year…….just an Icicle hanging from Mom's neck. :)

Merry Christmas to all!
Posted by Ewe and Eye at 7:58 AM No comments:

It has been a VERY busy year

I know that it has been a loooong time since I last posted when my 18 year old son says, "Mom, it's been forever since you have put something on your blog."  The answer is yes it has been and I am sorry.


I have felt like the dogs you see that constantly chase their tails and never get anywhere.  I have either been sitting on an airplane, bleachers or in a car.  It is all  "good stuff" but certain things got shoved aside and the blog was one of them.

Let me see if I can bring you all up to speed since my last post.

The weekend before Thanksgiving we went to Pensacola to see our daughter, Jenny, play in her LAST home volleyball game.

Jenny was named to the All-Tournament team and the team won their 6th consecutive Conference Title. 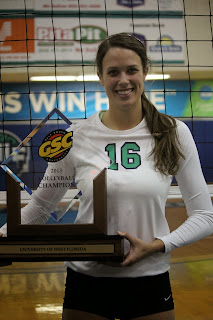 I ended up staying in Pensacola as Thanksgiving was just a few days later and we were all meeting up there to celebrate the holiday.

I cooked for Jenny and her roommates as they are student athletes as well and enjoyed coming home to a "home-cooked" meal after practice. 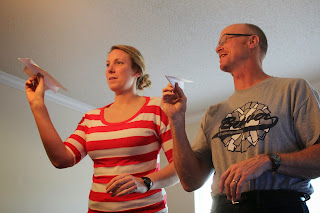 Thanksgiving was spent with girls who couldn't go home for the holiday.  We called it our "international" Thanksgiving.
We represented  Utah, Poland, Brazil and Iowa.  It was fun to say the least!

We flew home on Saturday and repacked our bags as the girls made the Regional Tournament that was held in Tampa, Florida.

I left on December 4th, my birthday, at 2:30 a.m. to catch a flight out of Des Moines.  I met Dave in Charlotte, NC and we continued on to Tampa.

The tournament was single elimination so we had no idea how long we would be there.
The team made it to the final rounds so we were there through Sunday.

In the meantime, Sam was once again left home alone and in the process caught the flu.
My friend has appropriately named him "Home Alone".  :)
Sam has been a trooper through all of our ins and outs!!

Dave and I arrived home on Sunday and I was to pick Jenny up at the airport for break on Wednesday morning.  (by any chance are you starting to see a glimpse into my world?)

We found out on Monday that Jenny was named to the All-American Team and that meant a banquet
on Wednesday evening.  I drove 2 hours north to get her at the airport in Minneapolis, stopped at home so we could quickly change clothes to drive 2 hours south for the All-American Banquet.
We arrived home at midnight. 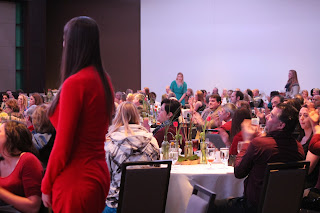 It's not a very good picture of Jenny. Some how I managed to delete most of the photos from a very special evening. UGH!

Natalie arrived home from school on Thursday from Buena Vista for her break, Dave and I were in charge of the concession stand and Sam had a ballgame. 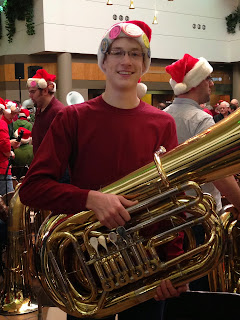 Speech Contest, Tuba Christmas and a Ballgame were all on the schedule for Saturday.  The girls were trying to understand why it was such a hectic schedule………think they have already forgotten. ;)

Friday, we got Drew from the airport in Minneapolis.  He hasn't been home since July.

In the middle of all this chaos I am trying to get the tree up, house decorated and some cooking done before everyone arrives home.  Oh, and make a couple of my Christmas gifts too.

I THOUGHT when the kids went off to college that things would slow down a bit……think I was wrong.

I wouldn't trade any of it!

Believe it or not but the last 9 months have been just like this.

I promise to be better at my posts from now on. :)