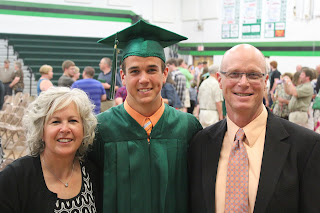 This is how it went.

Drew graduated from High School at 2 p.m.
As the ceremony was ending and final pictures were being taken cell phones began going off alerting us of  severe weather.

We all headed for our cars and began the journey home.
1 mile out of town we had to pull over due to the severe rain, wind and then the hail storm.

We traveled home to change our clothes and attend graduation parties when our son notified us that a classmate/4-H member of our club and a neighbor had lost their barn in the storm. 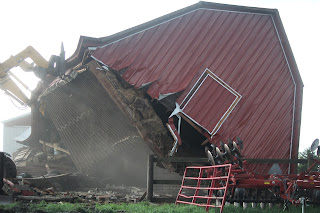 We threw some boots in the car just in case we could help.  Upon arriving we learned there were around 30 cattle trapped under the barn and the hay mow was on the ground.  It was like nothing I had ever seen before.  My heart just ached.
Help was on it's way so we headed back home to change clothes and gather up leftover food, etc from Drew's party the night before.
Friends helped lift the barn to see if there were any cattle that could be salvaged.  Several were injured and a total of 5 didn't make it.
During this process the rains continued to come down and extremely heavy.  As things finished up that evening roads had begun to flood.

We had to take the LONG way home on hard surface roads. 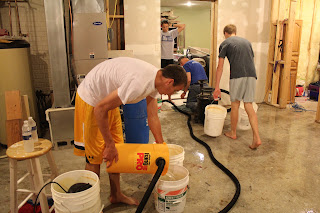 A few hours later we were doing this to our basement.
The sump pump couldn't keep up and we were hauling 5 gallon buckets of water up and outside.
We thought we had it licked and then out of nowhere the water just came in from every where.
The carpet came up and is now in my garage drying out.
At 3 a.m. when we had everything upstairs or on the ping pong table....that's where my sofa is we headed for some sleep.

School was canceled the next day as 90% of the gravel roads were impassible and major damage had been done to the hard surface roads.
I believe we had 7-10 inches of rain and that didn't count the 3.5 inches that we had received on Friday.
The expression, "When it rains, it pours" was true in this case.

We certainly weren't alone as most people had water in their basements. The damage could have been worse.....it's all just stuff!