Going to college is always a little scary but it's even harder when it is so far away. Jenny changed universities and it is all a good thing! She will be a sophomore at UWF in Pensacola, Florida. We just returned from taking her and took in some fun along the way. We traveled through Missouri, Tennessee, Arkansas, Alabama and Mississippi before reaching Florida. I think we stopped at every Produce stand there was between Missouri and Alabama......it got to be a joke. We have eaten more fruit in the last 7 days! I think it would be accurate to say things are moving rather well at our house! :) We even tried the local boiled peanuts, aka Goober peas. We were told we would get addicted to the peanuts.....................we're still waiting! :)

We did get one full day at the beach. Sun, a hand at driving a jet ski (saved our coins when we found out Jenny was going to Florida), collecting sea shells, floating in the ocean, more sun, and getting stung by a jelly fish........that was Natalie's near death experience. Hee Hee. We all had a great time, got Jenny settled, cried a few tears and began our trek home. Praise the Lord for safe travels. 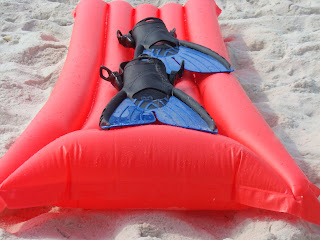 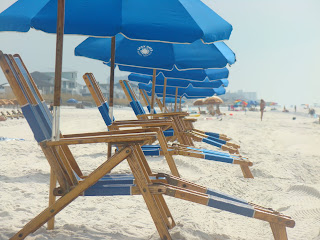 I saw this big watermelon in the distance and thought it was advertising produce so we stopped. It was called Watermelon Patch but had nothing to do with produce but more shoes than you could shake a stick at!! The guys thought I planned it.............nice surprise! 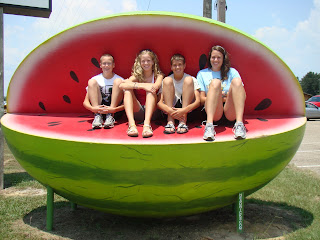